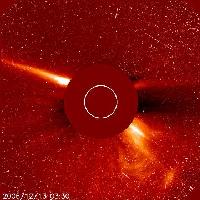 The Sun unleashed a large (X-3 class) solar flare December 13, 2006 along with a coronal mass ejection (CME) that appears to be headed towards Earth. The source of these eruptions was the very active sunspot region 930. A shower of high-energy particles appeared as specks and white streaks on the imagers aboard SOHO, the primary watchdog for solar storms. The video clip from LASCO C2 coronagraph shows a CME emerging from behind the occulting disk and then almost immediately the imager is being struck by the particles (that travel at half the speed of light).
The storm does not present a danger to the astronauts on board the Space Shuttle and the International Space Station as they are within the Earth's protective magnetic shield and in the protective walls of the spacecraft. However, the bulk of the cloud of particles from the CME could reach Earth in about a day or two. It might generate colorful aurora and pose some threat for spacecraft, communications equipment, and power systems on Earth. Currently, the stream of radiation and solar particles streaming by Earth is described by NOAA as a category S2 storm, relatively mild as these things go.
Pubblicato da u.torti a 10:35 PM